Yoga is a physical, mental, and spiritual practice or discipline. There is a broad variety of schools, practices and goals in Hinduism, Buddhism and Jainism. The best-known are Hatha yoga and Raja yoga.

The origins of Yoga have been speculated to date back to pre-Vedic Indian traditions, but most likely developed around the sixth and fifth centuries BCE, in ancient India's ascetic circles, which are also credited with the early sramana movements.The chronology of earliest texts describing yoga-practices is unclear, varyingly credited to Hindu Upanishads and Buddhist Pāli Canon, probably of third century BCE or later. The Yoga Sutras of Patanjali from first half of 1st millennium CE is one of a key surviving major texts on Yoga. Hatha yoga texts emerged around 11th century CE, and in its origins was related to Tantrism.
We are Providing Personal Yoga Trainer Near Me 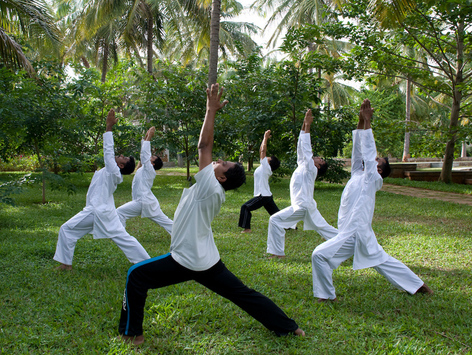 The ultimate goal of Yoga is moksha though the exact definition of what form this takes depends on the philosophical or theological system with which it is conjugated.

Hatha yoga also called haṭhavidya , is a branch of yoga. The word haṭha denotes a system of physical techniques supplementary to a broad conception of yoga. With its origins in Ancient India, Hindu tradition believes that Shiva himself is the founder of hatha yoga.

It is the constant pressure with different poses for a period to get strength for different parts and organs.

It is a program for different purpose with mixing of different sets of posing and dynamic group of yogic exercises for the sets of repetition to solve the purpose.

Artistic Yoga is a unique and powerful style of Yoga designed to develop and cultivate a beautiful, healthy body. This is an entirely new concept of Yoga designed to energize the body and quieten the mind that makes your Yoga experience even more intense, without tiring or taxing you in any way. With the help of ancient Yogic techniques that include a set of asanas (poses) pranayamas (breathing exercises), bandhas (locks), kriyas (cleansing techniques) and partner stretches, together with cardiovascular training, the teacher helps students cultivate core strength and develop inner awareness and peace.

Dynamic Yoga uses rhythmic repeated movements to prepare the body for genuine stillness in classical yoga postures. It is a complete methodology of somatic self enquiry that comprehensively recalibrates body and mind, action and perception.

Power yoga is a general term used in the West to describe a vigorous, fitness-based approach to vinyasa-styleyoga. Though many consider it to be "gym yoga," this style of practice was originally closely modeled on the Ashtanga method. The term came into common usage in the mid 1990s, in an attempt to make Ashtanga yoga more accessible to western students, though, unlike Ashtanga, power yoga does not follow a set series of poses, so classes can vary widely.

Ashtanga yoga is a style of yoga codified and popularized by K. Pattabhi Jois and is often promoted as a modern-day form of classical Indian yoga.Pattabhi Jois began his yoga studies in 1927 at the age of 12, and by 1948 had established the Ashtanga Yoga Research Institute for teaching the specific yoga practice known as Ashtanga Yoga. Ashtanga Yoga is named after the eight limbs of yoga mentioned in the Yoga Sutras of Patanjali.

It is designed to integrate the Pilates methodology into the practice of hatha yoga for a more complete system of exercise. Jonathan Urla documented the training system in his book, Yogilates - Integrating Yoga and Pilates for Complete Fitness, Strength, and Flexibility, published in 2002.

Yoga physiology are the descriptions of the human body, its layers, and the energy channels running through it used in various yoga systems.

Meditation brings wisdom; lack of mediation leaves ignorance. Know well what leads you forward and what hold you back, and choose the path that leads to wisdom.

After a hectic/stressful day, coming to Yoga is calming and restorative. Since I’ve been practicing I am much stronger have much greater range of motion. In upsetting situations I can call on my Yoga practice." Rahul Khanna,Dlf Phase 4,Gurgaon

Yoga at One is calming, relaxing and gives me the best night’s sleep I get in a week. Yogeta Rathi,Mg Road,Gurgaon

Your teaching is truly inspirational. Thank you for all I learned, you managed to make one of the most inactive people around excited to not only exercise but find balance in an otherwise kaleidoscopic world." Mohan Singh,South City,Gurgaon

Thank you so much for your superb teaching, great sense of humor, compassion, generosity. You're so real and such an urban yogi. Your guidance helped me feel "open to grace" again. That means a lot to me. I'll always remember this time with gratitude. It was an amazing retreat. Ramesh Shrama,Mg Road,Gurgaon

After doing yoga classes. I have less pain in my hips than usual and I feel less stress than I have for weeks. Sudhir Paul,Nirvana Country,Gurgaon

This is the way I like a Pilates studio to be, serene, peaceful, and specializes only in Plilates and nothing else. A place that allows you to focus and think of the 10 different parts of your abs that you need to work on. Even group classes are limited in size. Go take some classes! Mrs. Gupta,Sushant Lok Phae 2,Gurgaon

This is the way I like a Pilates studio to be, serene, peaceful, and specializes only in Plilates and nothing else. A place that allows you to focus and think of the 10 different parts of your abs that you need to work on. Even group classes are limited in size. Go take some classes! Mr. Gurmeet,Dlf City Phase 5,Gurgoan

Super friendly staff and the instructors are amazing. They really care about you doing each exercise in good form. Highly recommend! Mr. Kalra,Palam Vihar Phae 2,Gurgaon

Really awesome place.... The instructors are both knowledgeable and helpful.... Staff is warm and friendlyMr.Khan,Sector 56,Gurgaon